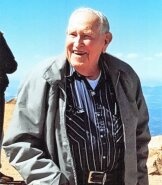 Arlis â€œSugâ€ Morgan, 89 of McCamey, Texas and former longtime resident of Georgetown, Texas, went to be with his Lord and Savior on Saturday morning October 27, 2018, at his home in McCamey.

Sug was born on January 21, 1929, in Waco, Texas. He joined the Navy at an early age, and was part of an elite group that specialized in underwater demolition known as a â€œFrog Manâ€. After leaving the military he married the love of his life, Margaret Forehand. Together they have made a wonderful life together for over 65 years.
Sug loved woodworking and fishing. He was always very active in his church. He was a devoted member of the Church of Christ. In his younger years, he drove the Joy Bus in Round Rock, where he also served as a Deacon.

Funeral services will be held at 2:00 pm on Monday, October 29, 2018 at the McCamey Church of Christ with David Brown and David James officiating.
Funeral services in Georgetown will be held at 2:00 pm on Wednesday, October 31, 2018, at the Gabriels Funeral Home Chapel with burial following in the Berryâ€™s Creek Cemetery.
To order memorial trees or send flowers to the family in memory of Arlis Morgan, please visit our flower store.