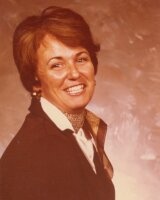 Annette was a stay at home mom, having her hands full with her four children. She was a woman of many talents. She loved sewing, painting, knitting, embroidery, crocheting, gardening, and canning. She was an avid animal lover.

The family will be receiving friends at the funeral home on Sunday, February 19, 2017 from 5:00 pm until 7:00 pm. Funeral services will be held 2:00 PM on Monday, February 20, 2017, at the Shaffer-Nichols Funeral Home Chapel with Reverend Tommy Parker officiating. Burial will follow in the Crane County Cemetery. Pallbearers will be Stephen Morse, Noah Wright, Daniel Blue, Thomas Blue, Damon Vanley, and Bill Wimberley.
To order memorial trees or send flowers to the family in memory of Annette Blue, please visit our flower store.