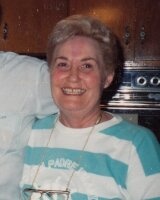 Graveside services will be held at 2 PM on Monday, June 27, 2016, in the Crane County Cemetery with Tommy Parker officiating.
Arrangements are under the care and direction of Shaffer-Nichols Funeral Home of Crane.

Anna was born on January 30, 1928, in Stinnett, Texas. She married K.O. (Kirk) Looney of March 3, 1946, in Penwell, Texas. He preceded her in death on July 30, 1991.
Anna was a homemaker and a longtime resident of Crane. She had lived in Crane since she was 11 years old. She enjoyed crossword puzzles and painting. Anna had served as President of the Eagles axillary for many years. She loved her family, and most of all loved spending time with her grandchildren, and great grandchildren.