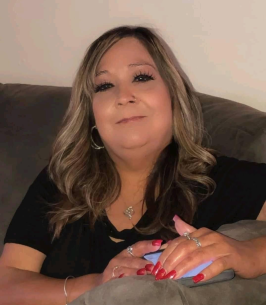 Anita Flores Martin has gone to be with our heavenly Father on January 26th, 2022.

She was born to Henry and Amelia Flores on October 2nd, 1974, in Andrews, Texas. Anita enjoyed spending time with her family, especially her grandkids. She was a proud Grandma. She was the best mom to her 3 kids and was always there when you needed her. She enjoyed doing crafts and anything artsy. She was deadly with a glue gun. She will always be remembered for her wit and charm. Anita was known to never leave the house without her big eyelashes on and a nice set of acrylic nails.
She will be greatly missed by everyone.

Anita is survived by her parents, Henry and Amelia Flores of Andrews; her sons, John (Leo) Martin of Odessa, and Arron (Miranda) Martin of Crane; her daughter, Alea (Preston) Garcia of Crane; 5 grandchildren, Jesamie, Azaiah, Azelia, Avah, Aveianna, and granddogs Paula, Luna, and Rambo.
She is also survived by her boyfriend Jesse Dominguez of Crane, who cared for her till the end. Her brothers Rick (Mellisa) Flores of Andrews and Steve (Julie) Flores of Crane; sisters, Racheal (Alfonso) Dominguez of Odessa, Sylvia Flores of Crane, Dolores Flores of New Braunfels; many nieces and nephews, and a lot of friends.

Visitation will be held on Saturday, January 29th from 9:00 am until services start at 2:00 pm at the Shaffer-Nichols Funeral Home Chapel in Crane. Burial will follow in the Crane County Cemetery.