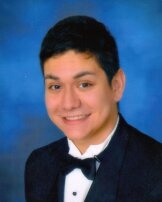 Andrew was born on October 19, 1994, in Austin. He had lived in Austin most all of his life. He was a student, and a Catholic.
Andrew was a great artist and loved to read. He enjoyed playing video games and his college classes.

He was preceded in death by his mother, Delma Ann Ramirez Duddleston; his paternal grandparents, Maria and Jesse Gonzalez; his maternal grandfather, George Ramirez Sr.; and an uncle, Miguel Gonzalez.