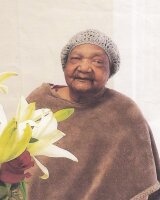 She was born on July 4, 1925, into a large family of twenty brothers and sisters, to Ben and Lulu Jenkins. Growing up in Vernon, Texas, she graduated from Booker T. Washington High School on May 28, 1943. She attended Wiley College before marrying Eugene Earl Price. She later remarried to Elijah McCullough Jr. who passed on October 31, 1984.

She lived in McCamey for over 66 years and made many dear friends. She was a member of Southern Union Baptist Church.

She is survived by her daughter, Virginia Phillips; her son Darnell McCulloch; her seven grandchildren; her nine great grandchildren, and a host of nieces, nephews, great nieces, and great nephews. She is preceded in death by her husband, Elijah; her siblings, a stepson, a granddaughter, and a great grandson.