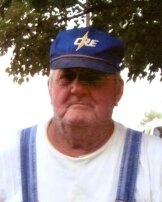 Albert was born in Tallahassee, Florida on December 9, 1932, and was raised in Dayton Beach, Florida. He was born to William Carlos Barton and Grace Lee Brown.

Albert was a journeyman plaster, his work brought him to Midland, Texas where he met his wife, Elsie Jewel Snodgrass. They were married on August 19, 1960. They celebrated their 54th wedding anniversary. Albert loved and placed his family first in life.

He was preceded in death by his parents, William Carlos Barton and Grace Brown; his sweet wife, Elsie Jewel Barton; his daughter, Lorrie Ann Baker; and two brothers, Ernest Barton and Johnny Brown.

Graveside services will be held at 10:00 AM on Tuesday, May 30, 2017, at the Serenity Memorial Park Cemetery in Midland with Pastor Terry Ohlmann officiating.
Arrangements are under the care and direction of Shaffer-Nichols Funeral Home of Crane.
To order memorial trees or send flowers to the family in memory of Albert Barton, please visit our flower store.